I am a lead data scientist at the FD Mediagroep, where I lead a team of four data scientists on the award winning BNR SMART Radio, and FD’s SMART Journalism projects. I obtained my PhD in Information Retrieval at ILPS (at the University of Amsterdam) in 2017 under supervision of prof. dr. Maarten de Rijke.

I have a background in the media, and currently work on news personalization and recommender systems. I don’t believe in the filter bubble, I don’t think personalized ads are the death of democracy, and in the current times where AI touches many aspects of our lives, I feel a responsibility as a computer scientist to explain about my work and area of expertise.

In the context of the upcoming workshop “AI and Journalism” Bennie Mols interviewed me for the website of the European Science-Media Hub, on how we apply AI in journalism for Het FD and BNR. Read the piece here: In response to my op-ed in Het Parool, Jim Stolze interviewed me and published the interview on the website of De Nationale AI Cursus (a free online course/MOOC on AI aimed at the general public); Read the article below: 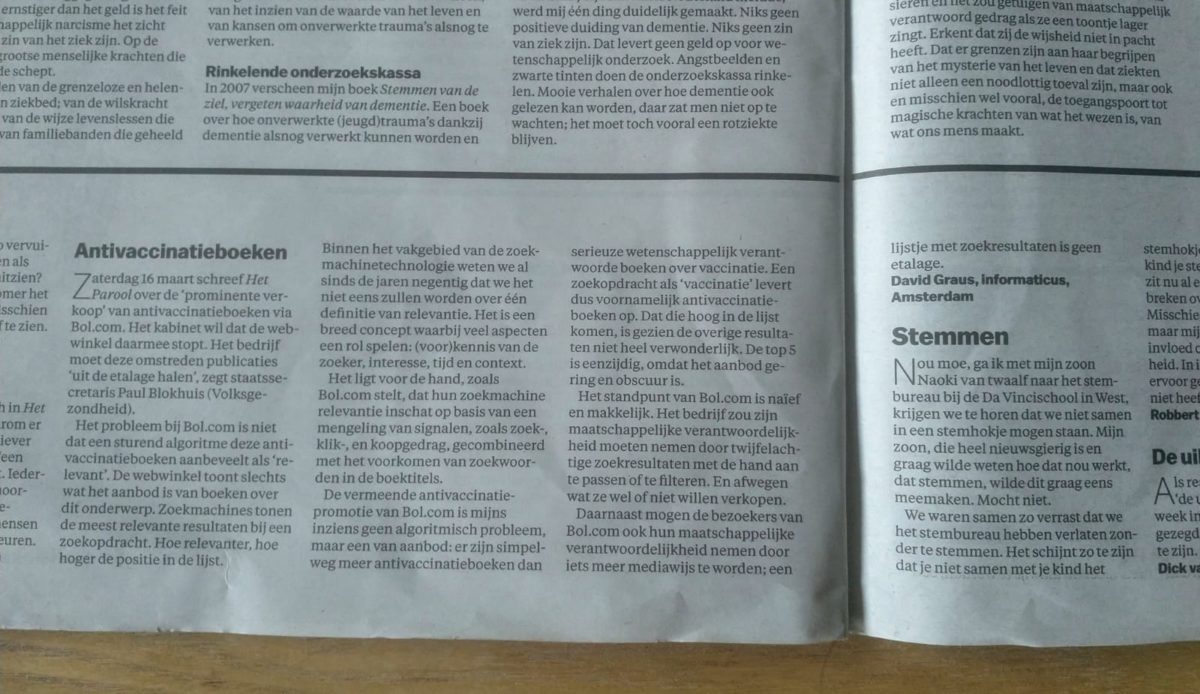 I wrote a response on recent coverage around the alleged ‘promotion’ of anti-vax books by bol.com, suggesting it is due to “influential, steering, algorithms.” In this piece I state it’s not an issue of algorithms, but of long-tail, obscure, content. My response was published in Het Parool, as an edited letter. Read the original, unedited piece (in Dutch) below.

Read the article by clicking on the image below:

And read more about our SMART Journalism project in our position paper:

In the magazine IP (“journal for information professionals”) I am interviewed as one of three young professionals who show that ‘traditional categories and conceptual frames need to be readjusted.’

More specifically, it describes how my multi-disciplinary background, with an academic background in media studies, professional experience in the media, with a PhD in computer science, is important in bridging the gap between ‘techies’ and ‘non-techies’, and of particular value in my current role where I work on enabling AI in media.

In the context of a high-profile legal case (involving a bunch of data acquired from encrypted “Ennetcom” phones) I assisted lawyer Inez Weski in acquiring insights and trying to understand how digital forensic tools were used in the collection of digital evidence. I did this work in the context of my PhD research on semantic search for E-Discovery. In this post, I list some of the publications that followed from my work and the case.

Hansken is the search engine developed by the Netherlands Forensic Institute, and used by the police and public prosecutors. In this article in De Volkskrant, titled “Met deze eigen zoekmachine spit de politie schatten aan digitaal bewijs door,” I answered a few questions and explained my view on the role of Hansken in the court of law and digital evidence acquisition.

For more information on the case and my work, there’s a more in-depth piece on my work for Weski in the following NEMO Kennislink article, which details my findings and concerns with respect to using a proprietary, continuously developed, and largely black-box tool for collecting digital forensic evidence:

Finally, if you still didn’t have enough, there’s a blog post on crimesite which explains a bit more on the (legal) case, and some interpretations on my report and findings;

In RTL XL’s “How it’s done” me and Company.info’s CTO Henk Pijper explain why and how we apply AI and data science at Company.info to gain insights from online news.

Stimuleringsfonds voor de Journalistiek published an article on ‘robo-journalism’, where I say something about the SMART Journalism project we are doing at FDMG, which involves personalization and summarization of newspaper articles. Read it here! (pdf). Snippet: