Yesterday BNR SMART Radio won two Dutch Interactive Awards (DIA 2019) Awards! We were nominated together with Elastique, the folks who designed the UX/interface of our BNR SMART Radio app which you can download here (or in your app stores, both Android/iOS)!

We won Gold in the category “Content”. Why, you may ask?

“Finally a reason to listen to Radio in general, and BNR in particular. Because advertising is absent and topics are tailored to the personal taste of the listener, who can search in a targeted way and express appreciation for a broadcast through a thumbsup, they reach new target audiences online.”

Next to this, we also won the Silver DIA2019 Award in the category “Disruptor”!

“In a world where radio has never deviated from the linear model, the jury finds this very disruptive. SMART Radio provides a personal radio experience and possibly a new revenue model in the long term. The jury members find the potential of the underlying strategy even more impressive. What if BNR joins forces with FD Mediagroep and combines the work of both parties in this? The jury sees all kinds of opportunities to fit in new forms of advertising (or to omit them). The collaboration between the agency and the media company has resulted in something that has never been seen before.”

For who has trouble keeping track 😅, these are the awards we won with SMART Radio:

Really happy and proud of our amazing AI team for winning the (first) Marconi Online Award at the Gouden RadioRing Gala, for BNR SMART Radio!

SMART Radio is the first product that comes out of our FD Mediagroup AI team! SMART Radio is released in beta for iOS (anytime) and Android, give it a try by downloading it here: https://bnr.nl/smartradio.

Read more about SMART Radio in our demo paper, presented at DIR 2018:

Oberon Berlage’s MSc. thesis: “Improving automated segmentation of radio shows with audio embeddings” which he wrote under my supervision during his internship at FD Mediagroep was awarded a 9/10, under condition that the work was publishable.

Turns out it was, as it was recently accepted at IEEE ICASSP2020 (the 45th International Conference on Acoustics, Speech, and Signal Processing) without any additional work/experiments (just a bit of reduction). But you already knew this… Oberon will be presenting this work in Barcelona, thanks to the generous support of UvA’s Information Studies program.

We now published a preprint, read it below:

His work revolved around improving BNR SMART Radio‘s text-based segmentation by incorporating audio signals in the form of audio embeddings. This turns out to improve over our text-based baseline by a whopping +32.3% F1-measure!

Even better: an audio-only approach, trained on a smallish openly available dataset, outperforms our text-only baseline by 9.4%. This means the segmentation method can be employed without need for audio transcription, which could be a money-saver. 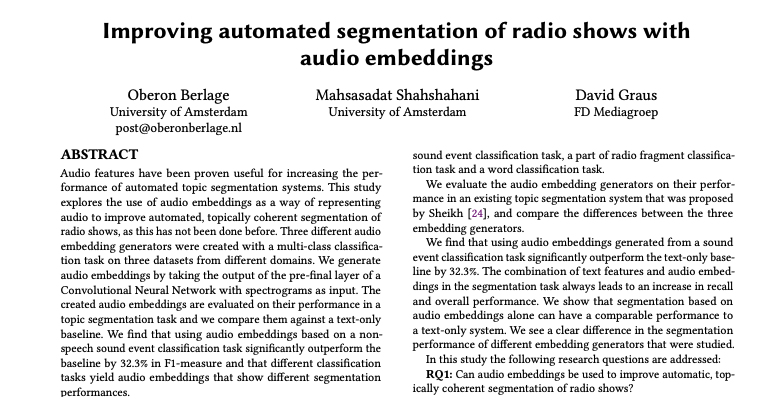 Update (28/1/2020): Oberon’s thesis was accepted and will be published at the IEEE 45th International Conference on Acoustics, Speech, and Signal Processing (ICASSP 2020), to be held May 4-8 in Barcelona, Spain! The submission is co-authored with Klaus Lux and myself.

Oberon Berlage recently successfully defended his MSc. thesis (title above!) for the Data Science Master at University of Amsterdam, and graduated with a whopping 9!

His thesis is now online, check it out at: http://scriptiesonline.uba.uva.nl/document/673254

I was invited to join the program committee of (the first) PodRecs: Workshop on Podcast Recommendations (to be held at RecSys’20).

Since our work on BNR SMART Radio, I am really interested in the space of audio, recommender systems, and information retrieval. Curious to see the submissions!

See the PodRecs call for papers, and check out the website, by clicking the image below. After winning the Marconi award for radio innovation, yesterday we picked up the AMMA Award for Media Innovation for our news personalization efforts at FD Mediagroep (both SMART Journalism for Het FD and SMART Radio for BNR Nieuwsradio)!

It’s really great to see that our current investment into AI and innovation seems to resonate with the outside world 🤖. And I am really happy to be with a company that sees this development as such an important direction that we are able to work with a big and talented team of data scientists, interns, engineers, and product folks 🤓

Below are a selection of press articles about me and/or my work. For a bit more context on some of the publications below, check out my posts in the media category.

I am an AI practitioner. I lead the data science chapter at Randstad, the global leader in the HR services industry. With 13 data scientists spread out over different product teams we work on projects involving recommender systems for job matching, NLP and information extraction. From 2018 to 2019 I worked as lead data scientist at the FD Mediagroep, where I led a team of five data scientists in building a custom learning to rank-powered recommender system for het Financieele Dagblad (the Dutch equivalent of the Financial Times), and the award-winning SMART Radio for BNR.

I have an academic background. I acquired my PhD degree in Information Retrieval from the University of Amsterdam (UvA) in 2017, where I worked under supervision of prof. dr. Maarten de Rijke at the Information and Language Processing Systems Group (ILPS).

My research revolved around semantic search and computational methods for automated understanding of large-scale textual digital traces. I defended my thesis “Entities of Interest — Discovery in Digital Traces” in June 2017. In the summer of 2015 I did an internship at Microsoft Research in Redmond, under supervision of Paul Bennett, Ryen White, and Eric Horvitz, where I worked on analyzing Microsoft’s Cortana user-interaction logs, which resulted in a best paper award at UMAP 2016, and the filing of a patent. In the winter of 2014 I visited prof dr. Doug Oard‘s E-Discovery Lab at the University of Maryland, College Park.

In my opinion the voice of computer scientists is missing in the highly polarized (public) debate around AI, which is largely dominated by non-technical people. For that reason, I think we wrongly fear filter bubbles, think personalized advertising will usher in the the end of democracy, believe tracking cookies are our worst enemies, and feel that companies should not be allowed to collect any of our data at all. I try to bring another perspective, and in that context I try to speak and write to get my point across to a broader audience. I have written and spoken in mainstream media for the general public—which I try to continue to do. Some things I am particularly proud of:

I have a background in Humanities, and obtained my Media and Culture (media studies) Bachelor of Arts at the University of Amsterdam in 2008. After a brief period of work and travel, in 2009 I started my MSc Media Technology at the Leiden Institute of Advanced Computer Sciences, at Leiden Universiteit. In 2012, I graduated with a project involving semantic annotation and network visualization.

I used to work in the media. I’ve worked for Dutch broadcasting company NTR (formerly Teleac, former-formerly Teleac/NOT) for several years as an editor for radio and online science programs. Here I gained experience in a wide array of editorial tasks such as writing (news) items, preparing interviews, but also with several aspects of audiovisual media production, like (video) editing, animating, and studio recording of a daily science news program.

During my PhD I leveraged this experience by writing short articles about our group’s publications for the general public, with the communications department of the University of Amsterdam. I co-authored and published several articles, some of which gained (inter)national coverage on tech sites, newspapers and magazines. See for example:

I further possess basic skills in graphic- and web-design, having built several websites for several people, creating thesis covers for friends, and logos for projects. I like hacking away at my car. I like photography, which you can witness on Instagram (@instagraus). I also like yoga and running. And like the rest of the world I like to travel, read books, watch films, play videogames, and listen to music.